Order of magnitude gives us the value nearest to the actual value, in terms of suitable powers of 10. (It does not tell us the absolute value of the quantity).

There are two ways to measure length or distances

Some indirect methods to measure large distances are:

This method is used to measure distances of planets which are very far away from earth.

The situation mentioned above is shown in the figure given below

Some other indirect methods used to measure long distances are:

An echo is the phenomenon of repetition of sound on reflection from an obstacle.

Here, a sound wave is sent to the obstacle and we observe the time it takes to return.

Suppose, distance between source producing the sound and the object is x, then, the total distance sound wave covered is going and coming back will be 2 x.

Other methods for measurement of distances, based on the same principle are: Laser method, RADAR method, SONAR method.

The idea is to first form mono-molecular layer of oleic acid on water surface.

• Next we lightly sprinkle some lycopodium powder on the surface of water in a large trough and we put one drop of this solution in the water.

• The oleic acid drop spreads into a thin, large and roughly circular film of molecular thickness on water surface.

• Then, we quickly measure the diameter of the thin film to get its area A.

• Suppose we have dropped n drops in the water.

• Initially, we determine the approximate volume of each drop (V cm3).

• This solution of oleic acid spreads very fast on the surface of water and forms a very thin layer of thickness t. If this spreads to form a film of area A cm2, then the thickness of the film

If we assume that the film has mono-molecular thickness, then this becomes the size or diameter of a molecule of oleic acid. The value of this thickness comes out to be of the order of 10–9 m.

Range of variations of length:

The sizes of the objects in the universe vary over a very wide range. Some examples are given in table given below: 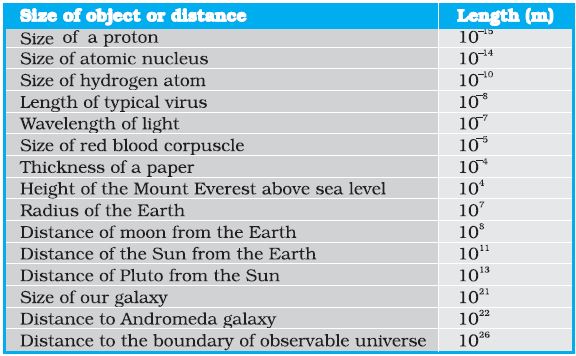 Mass is a basic property of matter. It does not depend on the temperature, pressure or location of the object in space. The SI unit of mass is kilogram (kg).

While dealing with atoms and molecules, we use another important standard unit of mass, called the unified atomic mass unit (u), which has been established for expressing the mass of atoms as

Small masses of commonly available objects can be determined by a common balance (the one used in shops).

Large masses in the universe like planets, stars, etc., based on Newton’s law of gravitation can be measured by using gravitational method (will be discussed in further chapters).

Measurement of small masses of atomic/subatomic particles etc., is done by mass spectrograph technique in which radius of the trajectory is proportional to the mass of a charged particle moving in uniform electric and magnetic field.

The masses of the objects, we come across in the universe, vary over a very wide range. Some examples are given below in the table 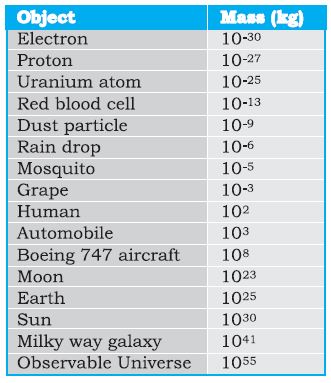 For measurement of any time interval, we need a clock. Any phenomenon which repeats itself after a fixed interval can serve the purpose of a clock.

Atomic clock: We now use an atomic standard of time, which is based on the periodic vibrations produced in a cesium atom. This is the basis of the cesium clock, sometimes called atomic clock, used in the national standards. It is highly accurate.

Other clocks, for example, wrist watch, pendulum clock etc., loose and gain time due to the effect of temperature, pressure and variation of acceleration due to gravity, so they are not considered as accurate.

In view of the tremendous accuracy in time measurement, the SI unit of length has been expressed in terms the path length light travels in certain interval of time (1/299, 792, 458 of a second).

Center of mass of 2 & n-particle system

Acceleration due to gravity