The net flow of charge in a direction through a conductor is called electric current. The branch of physics which deals with the charge in motion is called current electricity.

The charges particles whose flow in a definite direction constitutes the electric current are called current carriers.

In solid conductor: free valance electrons are the charge carriers

In liquid: Negatively and positively charged ions are the charge carriers

In gas: Positive ions and the electrons are the charge carriers.

Electromotive Force is the energy supplied by a source of electric power in driving a unit charge around the circuit. The unit is the volt. A difference in charge between two points in a material can be created by an external energy source such as a battery. This causes electrons to move so that there is an excess of electrons at one point and a deficiency of electrons at a second point. This difference in charge is stored as electrical potential energy known as emf. It is the emf that causes a current to flow through a circuit.

In SI units, the unit of current is Ampere.

Consider first the case when no electric field is present. The electrons will be moving due to thermal motion during which they collide with the fixed ions. An electron colliding with an ion emerges with the same speed as before the collision. However, the direction of its velocity after the collision is completely random. This is called thermal velocity of an electron.

If an electric field is applied, the electrons will be accelerated due to this field towards +Q. The electrons, as long as they are moving will constitute an electric current. The current for a very short duration is called as transient Current. 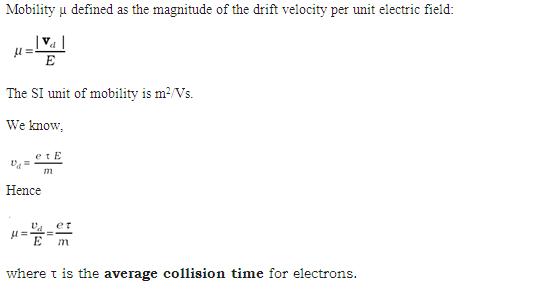 Superconductivity is a phenomenon of exactly zero electrical resistance and expulsion of magnetic fields occurring in certain materials when cooled below a characteristic critical temperature.